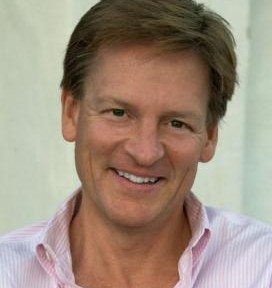 Michael Lewis has published many books on various subjects, all but one of them New York Times best sellers. His most recent works are Flash Boys, The Big Short, and Boomerang, narratives set in the global financial crisis. The Blind Side, published in 2006, tells the story of Michael Oher, a poor, illiterate African-American kid living on the streets of Memphis whose life is transformed after he is adopted by white Evangelical Christians. Before that he wrote Moneyball, a book ostensibly about baseball but also about the way markets value people. Both of his books about sports became movies, nominated for Academy Awards. His other works include The New New Thing, about Silicon Valley during the Internet boom; Coach, about the transformative powers of his own high school baseball coach; Losers, about the 1996 Presidential campaign; and Liar’s Poker, a Wall Street story based in part on his own experience working as a bond salesman for Salomon Brothers.

Mr. Lewis is a columnist for Bloomberg News and a contributing writer to Vanity Fair. His articles have also appeared in The New York Times Magazine, The New Yorker, Gourmet, Slate, Sports Illustrated, Foreign Affairs, and Poetry Magazine. He has served as editor and columnist for the British weekly The Spectator and as senior editor and campaign correspondent for The New Republic. He has filmed and narrated short pieces for ABC-TV’s“Nightline;” created and presented a four part documentary on the social consequences of the internet for theBritish Broadcasting Corporation; and recorded stories for the American public radio show, This American Life.

Mr. Lewis grew up in New Orleans and remains deeply interested and involved in the city. He holds a bachelor’s degree in art history from Princeton and a master’s degree in economics from the London School of Economics. He lives in Berkeley, California with his wife, Tabitha Soren, and their three children: Quinn, Dixie and Walker. In 2009 he published Home Game: An Accidental Guide to Fatherhood, about his attempts to raise them.

Coach; Author; Innovator; Eccentric; Brilliant; Unconventional. All these and more have been used to describe Mike Leach, who will sit down with bestselling author Michael Lewis for a one-on-one conversation on being arguably the most innovative coach in football history and how he has changed the way the game is played.

Adam McKay and Michael Lewis discuss a variety of topics from how they bring athlete stories to life to how sports media was the precursor to political media.