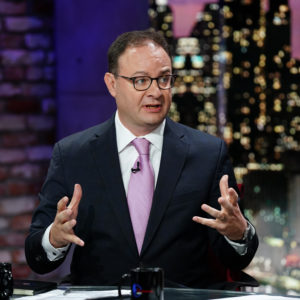 Wojnarowski, recognized with transforming NBA newsbreaking and reporting across the past decade-plus, is central in ESPN’s multimedia coverage of the NBA throughout the year — covering the league, its teams, players, trade deadline, free agency, the NBA Draft, the NBA Summer League and more. His reporting, insights and analysis appear on ESPN.com and in the ESPN app, featured on SportsCenter, NBA Countdown, Get Up, Outside the Lines and other programs.

Wojnarowski hosts The Woj Pod, which regularly delivers the biggest stars and newsmakers in the NBA. Wojnarowski also hosts “The Woj Report” on ESPN’s Youtube page.

Wojnarowski’s peers voted him the National Sports Media Association’s National Sportswriter of the Year in three consecutive years — 2017, 2018 and 2019. Wojnarowski joins past NSMA winners as Tom Verducci, Rick Reilly, Frank Deford, Jim Murray, and Red Smith as winners in three successive years. He was the first digital reporter to win the award.

Wojnarowski is the New York Times best-selling author of “The Miracle of St. Anthony: A Season with Coach Bob Hurley and Basketball’s Most Improbable Dynasty.”

Prior to his work for ESPN, Wojnarowski worked for Yahoo Sports, where he spent nearly 10 years, including two as editor of The Vertical. His standout career in journalism includes nearly 10 years at The Record  of New Jersey (where he was twice named the APSE “Columnist of the Year”), as well as several years each at The Fresno Bee, The Waterbury (Conn.) Republican-American.

He is a 1991 graduate of St. Bonaventure University in Allegany, NY and a 1987 graduate of Bristol Central High School. He was named the 2019 Alumnus of the Year at St. Bonaventure, and is inducted into the Russell Jandoli School of Communications Hall of Fame.

With the help of Gale Dickau, an English teacher of five decades at BCHS, Wojnarowski founded and funds the  “The Writing Initiative.” The multifaceted program encourages students at Bristol Central High School to write and helps them develop and hone their skills, funds scholarships for college, residential summer writing programs, numerous educational trips in the Northeast and develops teacher enrichment programs for educators teaching writing. Wojnarowski is also active in fundraising with the Bristol Boys and Girls Club and Family Center.