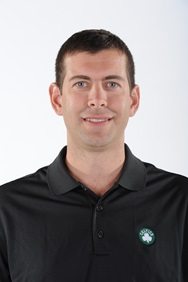 Head Coach, Boston Celtics Brad Stevens is in his first season as Head Coach for the Boston Celtics. He was named the 17th head coach in the history of the Boston Celtics on July 3, 2013. Stevens, 36, joins the Celtics after coaching Butler University where he boasted a 166-49 record, four league regular season championships, three league tournament titles and six trips to postseason tournament play. He has the top two single season win totals in Butler and Horizon League history, and he became the only coach in school history to lead a team to the NCAA Division I national championship game which he did twice. Stevens owns two Horizon League Coach of the Year awards and has rewritten the NCAA record book for Best Coaching Starts by Wins. During the 2012-13 season, he moved into the top spot on the six-year list with 165 victories. He captured the five-year record (139), moving ahead of Everett Case of North Carolina State (1947-51) in 2011-12, and he owns the three-year (89) and four-year (117) records. He is second on the two-year list with 56 wins. Stevens left a position as a marketing associate at Eli Lilly and Company in Indianapolis to pursue a career in basketball coaching. He served in a volunteer capacity in Butler's basketball office during the summer of 2000, before eventually gaining a full-time administrative position under Thad Matta. Stevens joined the Bulldogs' staff in 2000-01 as coordinator of basketball operations, handling a variety of administrative duties. He was offered a full-time assistant coaching position by Todd Lickliter in 2001-02. Stevens worked with Lickliter for six seasons, 2001-07. During Stevens' tenure as an assistant coach with the Bulldogs, Butler compiled a 131-61 record, won three Horizon League regular season championships and made four trips to postseason tournament play. Stevens was introduced as the new men's basketball head coach at Butler University on April 4, 2007, just three days after his former boss, Todd Lickliter, was named head coach at the University of Iowa. He became the third consecutive former Butler assistant coach to be named head coach of the Bulldogs, and he served under the previous two - Thad Matta and Lickliter. In his debut season in 2007-08, Stevens helped Butler become the first team in school and Horizon League history to record 30 wins. The 30-4 Bulldogs captured the Great Alaska Shootout, won a second consecutive Wooden Tradition Trophy, and wrapped up Horizon League regular season and tournament championships. Butler won a first-round NCAA Tournament game, before falling in overtime to #5 Tennessee in the second round. The Bulldogs were ranked in the "Top 25" of the A. P. and ESPN/USA Today national polls for 19 consecutive weeks, including a record three weeks in the "Top 10. " Only three coaches in NCAA Division I history - Bill Guthridge, North Carolina (34), Bill Hodges, Indiana State (33) and Jamie Dixon, Pittsburgh (31) - posted more first-year wins than Stevens did. And at the age of 31, Stevens became the third-youngest Division I coach to guide his team to 30 wins - the youngest in more than half a century. During the 2009-10 season, Stevens led the Bulldogs to a 33-5 overall record, the Horizon League's first 18-0 conference mark and fourth overall unbeaten record, a fourth consecutive league regular season championship, a second Horizon League Tournament crown in three years and a national runner-up finish in the NCAA Tournament. The Bulldogs were nationally-ranked for the fourth straight year, and Butler compiled a school-record, 25-game winning streak, the longest winning streak in the nation. The Butler coach was named NABC All-District 12 Coach, and he was a finalist for several additional national coaching awards. Butler ended the season as the No. 2-ranked team in the final ESPN/USA Today national poll. The following season he guided Butler to a 28-10 campaign, a league-record fifth consecutive Horizon League regular season championship, a second straight league tournament title, a fifth consecutive trip to the NCAA Tournament and a second straight national runner-up finish. In 2011-12, Stevens led a young Butler team to a 20-win season, a third place finish in the Horizon League regular season race and a return trip to postseason play. He helped the Bulldogs to the semifinals of the Horizon League Tournament and to the semifinals of the College Basketball Invitational. During the 2012-13 season, Butler's first in the rugged Atlantic 10 Conference, Stevens guided the Bulldogs to 26 wins, a tie for third place in the A-10, a trip to the A-10 Tournament semifinals, a runner-up finish at the Maui Invitational and three "Top 10" victories, including a win over No. 1 Indiana. He had the Bulldogs, picked sixth in the A-10 preseason poll, ranked in the "Top 25" for 11 weeks, reaching as high as No. 9 in both the Associated Press and the USA Today national polls. Stevens earned a B. A. degree in economics from DePauw in 1999. He was a four-year member of the basketball team at DePauw, earning the squad's "Coaches Award" in 1998-99. He and his wife, Tracy, have two children, son Brady and daughter Kinsley.