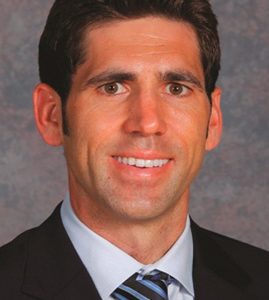 Bob Myers is currently in his seventh season as general manager of the Golden State Warriors and third with the additional title of president of basketball operations. In this role, he reports directly to Owner & CEO Joe Lacob and oversees the entire Basketball Operations department on a day-to-day basis. Myers was originally named GM on April 24, 2012.

Myers, 43, has assembled a roster that has won three NBA titles (2015, 2017, 2018) in the last four seasons and made four consecutive appearances in the NBA Finals. Over the last four seasons, the Warriors have won more regular-season games (265) than any team in NBA history over a four-season span, including an NBA-record 73 wins in 2015-16. Myers earned the NBA Executive of the Year award in both 2014-15 and 2016-17 and is the only executive in Warriors history to earn Executive of the Year honors multiple times and one of only five in league history to earn the honor twice in a span of three seasons.

During his tenure as general manager the Warriors have enjoyed their most successful stretch in franchise history, posting a .738 regular-season winning percentage (363-129), which is the best record in the NBA over that stretch. The Warriors have earned six-straight trips to the NBA Playoffs for the first time since doing so in each of the NBA’s first six-seasons in existence from 1946-47 through 1951-52. The franchise had qualified for the playoffs just once in the previous 18 years.

Throughout Myers’ tenure, the Warriors have retained many of their top talents, signing starters Stephen Curry, Kevin Durant, Draymond Green and Klay Thompson to contract extensions. Myers acquired 2015 NBA Finals MVP Andre Iguodala via trade in 2013 and signed Durant, the 2017 and 2018 NBA Finals MVP, in 2016 as well as four-time NBA All-Star DeMarcus Cousins in 2018.

Myers originally joined the Warriors on April 14, 2011, as assistant general manager/vice president of basketball operations, after enjoying a highly successful 14-year stint as a representative to numerous NBA players. During his first year with the Warriors organization, he worked closely under the tutelage of then-General Manager Larry Riley on all Basketball Operations matters, including contract negotiations, talent evaluation, roster management, scouting and CBA compliance.

The game of basketball changes quickly – so in an era of three-point shooting, floor spacing, and versatility, it’s natural to wonder what the next iteration of the game will look like.