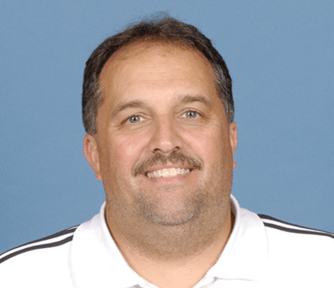 Former NBA Head Coach Van Gundy served as head coach of the Miami Heat for two-plus seasons from 2003-05, posting a regular season record of 112-73 and a postseason mark of 17-11. His . 605 regular season and . 607 playoff winning percentages are both tops in franchise history. His 17 playoff victories place him second on the Heat's all-time list and his 112 regular season wins ranks third in team history. Despite a rash of injuries and an unforgiving schedule which saw the Heat drop their first seven games, Van Gundy righted the ship and led Miami to a 42-40 record during his first season as head coach in 2003-04. They became just the fourth team since the NBA went to its current playoff format in 1983-84 to reach the playoffs after starting the season with at least seven consecutive losses. The 42 wins was a 17-win improvement from the previous season, the second-best turnaround in franchise history and the fourth-best in the NBA from 2002-03 to 2003-04. Van Gundy earned NBA Eastern Conference Coach of the Month for March 2004, after leading the Heat to an Eastern Conference-best 12-3 mark during the month. Miami finished the regular season by going 17-4 over its final 21 games, finished second in the Atlantic Division and earned homecourt advantage in the First Round of the playoffs. During the 2004 NBA Playoffs, Miami defeated New Orleans during the First Round, 4-3, making Van Gundy just the fourth rookie coach in NBA history to win a decisive seventh game during a playoff series. He guided the Heat to the Eastern Conference Semifinals for just the third time in franchise history, where they eventually fell to top-seeded Indiana in six games. Expectations rose for the Heat in 2004-05 when Miami acquired All-Star center Shaquille O'Neal, and Van Gundy did not disappoint, leading them to a 59-23 record, the second-most wins during a single season in team history, and the Southeast Division championship. The Heat won the division by 14 games, the largest margin for any division winner in the NBA that season. For the second straight time, he guided the Heat to a 17-win improvement from the previous season, making him only the second coach in NBA history to lead his team to at least 15-win improvements in consecutive seasons. Van Gundy was named head coach of the Eastern Conference All-Stars for the 2005 NBA All-Star Game in Denver, where he led the East to a 10-point win. He also earned NBA Eastern Conference Coach of the Month honors in both December 2004 and March 2005. The Heat went on a franchise-record 14-game winning streak from Dec. 6-Jan. 1 and later reeled off 12 consecutive victories from Feb. 26-Mar. 19, becoming the first Eastern Conference team with a pair of double-digit win streaks in the same season since the 1995-96 NBA Champion Chicago Bulls. During the 2005 NBA Playoffs, Miami advanced to the Eastern Conference Finals, recording four-game sweeps of both New Jersey and Washington. It marked just the second time in Heat history that they reached the Conference Finals and came within minutes of a trip to the NBA Finals, before falling to Detroit in Game #7. It was also the first time in team history that Miami had advanced to at least the Conference Semifinals in consecutive seasons. His . 607 winning percentage during the playoffs ranks 10th on the NBA's all-time list. Van Gundy spent 12 years with the Heat, arriving prior to the 1995-96 campaign and served as assistant coach under Pat Riley for two seasons. He was elevated to assistant head coach in 1997, a position he held for six seasons. Van Gundy was the team's lead assistant until being named head coach on Oct. 24, 2003. He resigned as head coach on Dec. 12, 2005 for personal reasons, but remained with the organization as an NBA scout and later a consultant. Prior to his tenure with Miami, Van Gundy coached at the University of Wisconsin for three seasons, including head coach in 1994-95. He began his coaching career as an assistant at the University of Vermont from 1981-83, then served as head coach at Castleton State College (VT) from 1983-86. After stints as an assistant coach at Canisius College (1986-87) and Fordham (1987-88), he was head coach at the University of Massachusetts-Lowell from 1988-92. In eight years as a college head coach, Van Gundy compiled a records. A native of Indio, Ca. , Van Gundy was born on Aug. 26, 1959. He earned a Bachelor of Arts degree in English and a Bachelor of Science in physical education from SUNY-Brockport in 1981. While at SUNY-Brockport, Van Gundy played basketball for his father, Bill. His brother, Jeff, was a head coach in the NBA for 11 seasons, most recently with the Houston Rockets. Van Gundy and his wife, Kim, have four children, Shannon, Michael,Alison and Kelly.