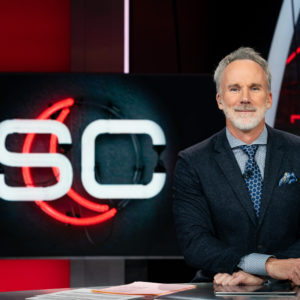 Buccigross joined the company as an ESPNEWS anchor in 1996, prior to the launch of the 24-hour sports news network. He was the primary host of NHL 2Night, ESPN2’s 30-minute program dedicated to hockey highlights and news from 1998-2004. He currently serves as the play-by-play voice of the NCAA Hockey Championship (Frozen Four). “Bucci” also sometimes fills in as host of the nightly hockey highlights program In the Crease on ESPN+.

Before joining ESPN, Buccigross had been at WPRI-TV in Providence, R.I. He started as the station’s weekend sports anchor in 1994, and later was named weekday anchor. Before WPRI, Buccigross worked at a local news network, Cape 11 News, in Massachusetts from 1989 to 1994.

Buccigross also authored a book entitled,” Jonesy: Put Your Head Down and Skate: The Improbable Career of Keith Jones.”