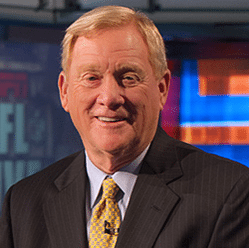 Commentator, ESPN Six-time National Football League Executive of the Year Bill Polian will join ESPN as an NFL analyst in March 2012. He will appear throughout the year on NFL Live, NFL32, and SportsCenter in addition to regularly contributing to ESPN. com, ESPN The Magazine, ESPN Radio and other platforms. Polian's ESPN role focuses on the NFL Draft, free agency and the multitude of other business-related aspects of pro football, including player transactions, trades, salary cap issues and league rules. One of the most accomplished front office executives in NFL history, Polian helped build multiple successful franchises during his 24 years as a general manager. In all, his teams made 17 playoff, eight conference championship game and five Super Bowl appearances, including the Super Bowl XLI champion Indianapolis Colts. He also has the distinction of having drafted four-time NFL MVP Peyton Manning, arguably one of the top players ever to play the position. Widely praised as both a top talent evaluator and influential executive, Polian is the first six-time recipient (1988, 19991, 1995, 1996, 1999 and 2009) of the NFL Executive of the Year award from The Sporting News, an honor bestowed on him by his peers. He served on several league committees: Competition Committee, Diversity Committee, Management Council Senior Executive Committee and Chairman of the College Relations Committee. He also played a key role in the NFL's Collective Bargaining Agreement in 2011 that prevented the loss of regular season games, establishing long-term labor piece. Polian most recently served as President and Vice Chairman of the Indianapolis Colts (1997-2011), overseeing all football and administrative aspects of the club and guiding the franchise through an extraordinary period of success: 11 playoff appearances, eight division titles, two AFC Championship games, and champions of Super Bowl XLI. Polian drafted Manning with the top overall pick in the 1998 NFL Draft and either drafted or signed a number of other Colts players who became league stars, including Dwight Freeney, Dallas Clark, and Marvin Harrison. Before joining the Colts, Polian helped build the expansion Carolina Panthers from 1994-97 as the franchise's first General Manager. The team went to the NFC Championship game in only its second year of existence. He also served as the NFL's Vice President of Football Development during the 1993 season. Polian rose to prominence as General Manager of the Buffalo Bills for seven years (1986-93). He constructed a team that made the playoffs six consecutive seasons (1988-93) and won four straight AFC Championships, reaching an unprecedented four consecutive Super Bowls (1990-93). Before Polian was promoted to GM, the Bills had suffered back-to-back 2-14 seasons and fan interest was at an all-time low. Polian was originally hired as director of pro personnel in 1984 and was instrumental in the signing of Bruce Smith to his first NFL contract. Prior to his tenure in Buffalo, Polian began his career in professional football with the Kansas City Chiefs and the Chicago Blitz of the United States Football League. He moved to the Canadian Football League, where he assembled Grey Cup winning teams with the Montreal Alouettes and Winnipeg Blue Bombers. Before joining ESPN, Polian did some analyst work for SiriusXM NFL Radio in February 2012.