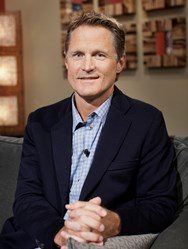 Analyst, TNT Former President of Basketball Operations and General Manager, Phoenix Suns TURNER SPORTS Steve Kerr returns for his fourth season during his second stint with TNT and serves as a NBA analyst for TNT's coverage of the 2013-14 season. Kerr spent four seasons with TNT as a game analyst from 2003-2007, when he called a full slate of regular-season and playoff games. He also worked on TNT marquee events, including three NBA All-Star Games and three consecutive Conference Finals. CAREER In between Kerr's work on TNT, he served as the president of basketball operations and general manager for the Phoenix Suns from 2007-2010. In 2010, the Suns advanced to the Western Conference Finals, losing in six games to the eventual champions - Los Angeles Lakers. Kerr is the all-time best three-point player at . 454 (726/1,599), as well as the single season leader in three-point accuracy, hitting . 524 (89-170) of his attempts during the 1994-95 season. He also won the 1997 Long Distance Shootout, competing in the event from 1994-97. He won three NBA Championships with the Chicago Bulls (1995-96, 1996-97, 1997-98) and two NBA titles with the San Antonio Spurs (1998-99 and 2002-03). Kerr is just the second player in NBA history to win two championships with two different teams in consecutive seasons (joining Frank Saul of the 1950-51 Rochester Royals and the 1951-52 Minneapolis Lakers). He was named to the NBA All-Interview Second Team in both 1998 and 1999. He appeared in 835 regular season games, averaging 6. 2 points, 1. 9 assists and 1. 2 rebounds in 18. 3 minutes per contest. PERSONAL He and wife Margot have three children - Nicholas, Madeleine and Matthew. Currently, Kerr serves on the Board of Directors of the San Antonio chapter of Boys Hope, Girls Hope, and is an active member of Big Brothers, Big Sisters. Kerr is also a member of the Board of Directors for "Playing For Peace," an organization that uses basketball as a means to bring communities facing conflict together. He graduated from University of Arizona with a degree in general studies.