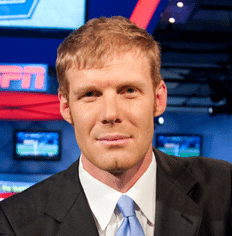 Lead Analyst, ESPN and ABC Sports Soccer Coverage @alexilalas22 Alexi Lalas is currently the lead analyst for ESPN and ABC's coverage of Major League Soccer, U. S. Men's National Team matches, Barclays Premier League action and more. Lalas, former soccer star and later general manager of the Los Angeles Galaxy of the MLS, joined ESPN in January 2009 as a soccer studio analyst. Lalas made his ESPN FIFA World Cup debut in 2006, and served as a studio analyst for the network's critically acclaimed coverage of 2010 FIFA World Cup South Africa. Known as one of the fiercest defenders in American soccer history, Lalas was elected to the National Soccer Hall of Fame in 2006. Lalas retired from professional soccer in 2004 after a 10-year professional career that made him one of the first Americans to play in the ultra-competitive league, the Serie A in Italy. While playing for the Italian club Padova, Lalas was the team's leader on defense and even netted a few goals. Padova were originally interested in Lalas as a result of his superb play in the 1994 FIFA World Cup. Lalas was a fixture in the central defense for the U. S. National team during the 1994 World Cup in the United States, playing all 90 minutes of each of the four U. S. games and earning an honorable mention as an All-Star. With national team and European soccer experience under his belt, Lalas made a smooth transition to the MLS in the league's 1996 inaugural season. Lalas played for the New England Revolution (1996-97), the New York MetroStars (1998), and the Kansas City Wizards (1999). In 2000, Lalas took time off from the soccer pitch to be a soccer announcer for NBC during their coverage of 2000 Olympics from Sydney, Australia. Lalas was also a host on ESPN2's MLS Extratime . Lalas made his return to the MLS in 2001 when he joined the Los Angeles Galaxy (2001-04). In 2002, Lalas and the Los Angeles Galaxy won their first MLS Cup. After retiring from professional soccer as a player, Lalas was appointed the general manager for the San Jose Earthquake. In 2005, Lalas served in the same role of the New York MetroStars and helped orchestrate a smooth transition for the team as it was being purchased by Red Bull. In April 2006, Lalas resigned from his post with the New York Red Bull to take over as president and general manager of the Los Angeles Galaxy. Lalas was relieved of his duties in August 2008. Lalas attended Rutgers University, and while there was honored with the Hermann Trophy and the Missouri Athletic Club Award as the top Division I college soccer player.