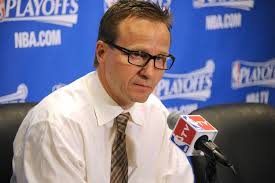 Scott Brooks oversaw one of the most successful runs in recent NBA history in his eight seasons at the helm of the Oklahoma City Thunder, leading the Thunder to four Northwest Division titles, three Western Conference Finals and an NBA Finals appearance. Over a five season period (2011-12 to 2014-15) he led the Thunder to the second best regular season record, trailing only San Antonio for the most wins during that time period. Most recently, Brooks guided an injury ravaged Thunder team to 45 wins during the 2014-15 campaign, narrowly missing the postseason after five straight appearances, despite the absence of MVP Kevin Durant for much of the season. Dating back to the start of the 2009-10 season, Brooks was the third-most winningest coach in the NBA, as the Thunder went 338-207 (. 620 winning percentage) during his tenure. After posting the top record in the Western Conference through the first half of the 2013-14 season, Brooks represented the Thunder by coaching the 2014 Western Conference All-Stars in New Orleans. The All-Star coaching honor marked the second of Brooks' career (Brooks and his staff also coached the 2012 All-Star Game in Orlando). During the 2012-13 season, the Thunder claimed the top spot in the Western Conference after finishing with a record of 60-22. On the year, Oklahoma City posted the largest point differential in the NBA in more than five seasons (9. 2 points per game). In fact, Oklahoma City won 44 games by double figures, including 19 games of 20 or more (both tops in the NBA). The Thunder finished the season as the third highest scoring team in the NBA (105. 7 points per game) while holding the opposition to the second worst field goal shooting percentage (42. 5%). At the end of the 2012-13 season, the Thunder became just the second team in NBA history to increase its winning percentage for five consecutive seasons (while maintaining a winning percentage of . 700 or better in two seasons). During the 2011-12 season, Brooks guided the Thunder to the NBA Finals after finishing the regular season with a record of 47-19. In 2010-11 Brooks led the Thunder to 55 wins and a spot in the Western Conference Finals after Oklahoma City captured playoff series victories over the Denver Nuggets and Memphis Grizzlies. After the late-season acquisition of Kendrick Perkins from the Boston Celtics in mid-March, Brooks guided the Thunder to a 13-4 mark in the final 17 games of the regular season. Brooks received the 2009-10 Red Auerbach NBA Coach of the Year award after guiding one of the biggest turnarounds in NBA history. A year after winning 23 games, the Thunder concluded the 2009-10 season with a record of 50-32 (. 610). The 27-win improvement was tied for the eighth largest in NBA history. In the 2010 postseason, the eighth-seeded Thunder took the eventual NBA Champion Los Angeles Lakers to a Game 6 in what proved to be one of the more entertaining first round playoff series in recent memory. Brooks was named interim head coach of the Thunder 13 games into the 2008-09 season and was later named head coach on April 15, 2009 prior to the team's final game of the season. A day after being awarded his first NBA head coaching position, Brooks led the Thunder to their most lopsided victory of the year in the team's season finale, a 126-85 win versus the Los Angeles Clippers at STAPLES Center. Prior to his appointment as interim head coach on November 22, 2008 Brooks joined P. J. Carlisemo and the Thunder coaching staff at the start of the 2007-08 season. Prior to his time with the Thunder organization, Brooks spent the 2006-07 season working as an assistant coach with the Sacramento Kings. His NBA coaching career began with the Denver Nuggets, where he served as an assistant coach from 2003-06. Brooks helped lead the Nuggets to the playoffs in each of his three seasons with the club. Brooks enjoyed an 11-year (1988-99) playing career in the NBA, appearing in 680 regular season games with Philadelphia, Minnesota, Houston, Dallas, New York, Cleveland and the Los Angeles Clippers. Brooks' teams advanced to the postseason six of his 11 NBA seasons, and in 1994, he was a member of the NBA Champion Houston Rockets. Brooks holds career averages of 4. 9 points and 2. 4 assists per game. In 2000, Brooks was a player/assistant coach with the Los Angeles Stars of the ABA. The following season, he served as the head coach of the Southern California Surf of the ABA, guiding the club to a 23-14 record. A native of Lathrop, California, Brooks began his collegiate career at Texas Christian University, where he played one season. He then transferred to San Joaquin Delta College for his sophomore season, before spending his final two years at UC Irvine, where he averaged 23. 8 points per game as a senior.