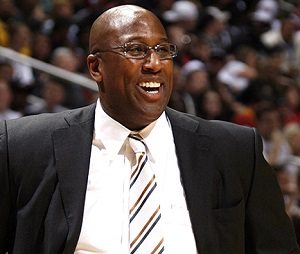 Named on May 7, 2015, an assistant coach for the U. S. Pan American Men's Basketball Team, Mike Brown helped lead the team to a 3-2 finish and the bronze medal marking the 13th time in 17 Pan American Games that the American men had medaled. Possessing more than seven seasons of experience as an NBA head coach, including six seasons with the Cleveland Cavaliers and one-plus with the Los Angeles Lakers, Brown owns an impressive all-time NBA head coaching record of 347-216 (. 616 winning percentage). Leading teams to the NBA Playoffs six times, his teams compiled a 47-36 record in the playoffs. Brown served as head coach of the Cleveland Cavaliers during two separate periods. Head coach of the Cavaliers from 2005-2010, he returned to the Cavs as the team's head coach for the 2013-14 season. Brown owns the best winning percentage of any coach in the Cavs' history. In six seasons with the Cavs, he compiled a regular season record of 305-187 (. 620). TheCavs posted at least 45 wins in five of the six seasons he coached, the first and only time that Cleveland reached that mark in five straight seasons (2005-2010). Brown compiled a postseason record with the Cavs of 42-29 (. 592). He led the team to at least the second round of the postseason in each of his first five seasons, including Cleveland's first ever trip to the NBA Finals in 2007. Brown also led the Cavaliers to become only the 12th team in NBA history to have 66 wins, a franchise high. Brown was the fourth youngest coach in NBA history to win 60 games. Brown was named the 2008-09 NBA Coach of the Year by members of the media and also earned Coach of the Month honors three times during the 2008-09 season (December, February and March) and, was coach of the Eastern Conference All-Stars at the 2009 All-Star Game in Phoenix, Arizona. After posting a 50-32 record in 2005-06, which was the most wins as a first-year head coach in team history, Brown became the first rookie head coach since the 2001-02 season to post 50 wins in a season. Brown followed that up with another 50-win season (50-32) in his second year, 45 wins (45-37) in his third year, 66 wins (66-16) in his fourth year and 61 wins during season number five. Brown's 42-29 (. 592) postseason record with the Cavs was the third-best playoff winning percentage in the NBA over that span behind only the Los Angeles Lakers and Boston Celtics. During his first playoff run as head coach, Brown led Cleveland to the Eastern Conference semifinals in the 2006 Playoffs and became the first coach in franchise history to lead his team to a playoff series win in his first season by defeating Washington, 4-2, in the first round of the Eastern Conference playoffs. In the 2007 Playoffs, Brown led the Cavaliers to their first Eastern Conference championship and a trip to the NBA Finals after Cleveland knocked off the Pistons, 4-2, in the Eastern Conference Finals. He guided the Cavaliers to their first series sweep in the first round versus Washington and then led Cleveland to a 4-2 win in the conference semifinals against New Jersey. In the 2008 Playoffs, the Cavaliers defeated the Washington Wizards, 4-2, before taking the eventual NBA Champion Boston Celtics to a seven-game series. In the 2009 playoffs, the team swept the first two rounds, over the Detroit Pistons and Atlanta Hawks, for the first time in franchise history. The team finished the postseason at 10-4 (. 714), which was the best record based on winning percentage in franchise history and the second-highest number of wins in a postseason, trailing only the 2007 playoffs when the team went 12-8 (. 600). In 2009-10, Brown again led the Cavs over the 60-win plateau, spearheading Cleveland to the best overall record (61-21) and top home record (35-6) in back-to-back seasons. With at least 60 wins in consecutive seasons, the Cavs became only the ninth different franchise (18th time) to accomplish that feat. In between his Cleveland head coaching assignments, Brown also coached the Los Angeles Lakers for the 2011-12 season, and the first five games of the 2012-13 season. In his first season at the helm with the Lakers in 2011-12, Brown led the team to a 41-25 (. 621) lockout shortened record that saw Los Angeles finish atop the Pacific Division as they advanced to the second round of the 2012 Playoffs. Brown also boasts of seven seasons as an NBA assistant coach, including positions with the Washington Wizards, San Antonio Spurs and the Indiana Pacers. Brown joined the Cavaliers after spending two seasons as the associate head coach of the Indiana Pacers and three seasons as an assistant coach for the San Antonio Spurs. His career record as an assistant coach was 341-201 (. 629) and he won a division title with Indiana in 2003-04 after three straight division titles with San Antonio. He helped lead Indiana to consecutive playoff appearances including a trip to the Eastern Conference Finals in 2004. He was also on the bench for the Spurs during their 2003 World Championship season. While Brown was with San Antonio, the Spurs won at least 58 games each season. He also was the head coach for the Spurs' summer league teams in Boston and Salt Lake City. Brown spent three years with the Washington Wizards' staff beginning in 1997, spending the first two years as an assistant under Bernie Bickerstaff and his final year as the team's professional scout. He began his NBA career with the Denver Nuggets in 1992, where he spent five seasons, first as the team's video coordinator and then as a scout. Brown is a 1992 graduate of the University of San Diego with a degree in business. He played basketball for two seasons at USD after spending two years at Mesa Community College. He attended high school in Germany at Wurzburg American High School. He has two sons, Elijah and Cameron.