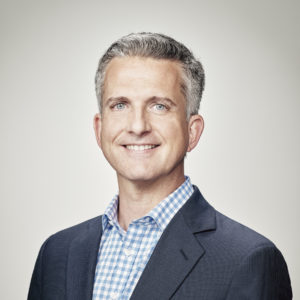 Bill Simmons is a columnist, author, TV host, analyst, and podcaster whose prolific writings, rants, and insights have become the voice for a generation of American sports fans. In March of 2016, he launched his newest immensely-successful website, The Ringer. The network is home to an intriguing blend of sports, pop culture and an array of some of the most popular podcasts available today.

In 2015, he signed a multi-year, multi-platform deal with HBO, an umbrella under which his weekly talk show Any Given Wednesday aired in 2016. In July 2018, Simmons signed a new deal with HBO that will see him continue to produce content and assets for the network, including video podcasts, features, shows, and documentary films. This came on the heels of the hugely successful HBO documentary ​Andre the Giant​, which Simmons executive produced. ​Andre the Giant quickly became the most-watched documentary in HBO Sports history with nearly 7 million viewers across the network’s linear and digital platforms.

Previously, Simmons served as the founding editor of Grantland, the sports and pop culture website that he created in 2011. The site featured a mix of original columns, long-form features, and blog posts by an accomplished and diverse lineup of the internet’s leading writers and editors. Simmons also served as co-host of ​The Grantland Basketball Hour and was an executive producer of the Emmy and Peabody Award-winning documentary series ​30 for 30. His podcast, ​The B.S. Report.​, was a mainstay in the top 10 among Sports & Recreation podcasts on iTunes.
Off-screen, Simmons is the author of two New York Times No. 1 best-sellers, ​The Book of Basketball and ​Now I Can Die in Peace.​

Simmons received a Master’s Degree in Journalism from Boston University and a Bachelor’s Degree in Political Science from the College of the Holy Cross.

He currently lives in Los Angeles.

Who Says No? A 1-On-1 With Adam Silver and Bill Simmons