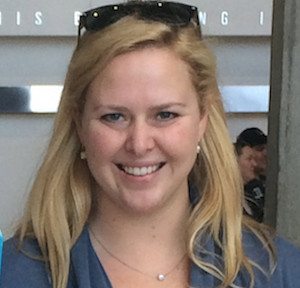 Staff Writer, Grantland Katie Baker has been a staff writer at Grantland since the site's launch in June of 2011. In addition to covering hockey and the NHL, she has reported from events ranging from the Olympics to the Americas Cup to the NFL Playoffs, and has written on subjects including wedding etiquette, Soviet history, Kim Kardashian, and an Oregon ghost town. Before Katie joined Grantland, her work was published online and in print for Deadspin, the New York Times Magazine , The Awl, the Wall Street Journal , and New York . Katie graduated from Yale University in 2005 with degrees in Economics and History and earned the CFA charter in 2009. From 2005 until she started at Grantland, Katie worked in the investment management division of Goldman Sachs in New York as an analyst, associate, and vice president with the Family Investment Office team. Originally from Pennington, New Jersey, Katie now lives in Truckee, California with her husband David and dog Stanley. To this day, her career highlight remains being featured in Businessweek Magazine at age 13 based on her work for an Internet Relay Chat dotcom called TalkCity. (The company would be delisted from the Nasdaq just a few years later. )