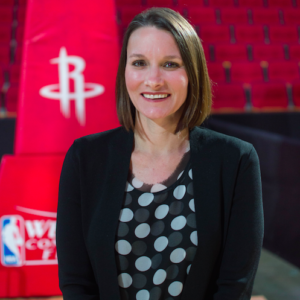 Gretchen Sheirr is in her 18th season with the Houston Rockets, and her third as Chief Revenue Officer (CRO). She previously served as Vice President of Sales & Service. Sheirr is responsible for the sales, service, and overall revenue strategy for the organization. She joined the organization as an account executive in 2001 and worked her way up the ranks.

In 2017, Sheirr was named one of Sports Business Journal’s Forty Under 40, which annually recognizes the top young professionals in sports business. Sheirr is also a founding board member of WISE Houston and is a member of Houston’s Executive Women’s Partnership.

A native of Spring, Texas, Sheirr graduated from Louisiana State University in Baton Rouge with a degree in marketing. She also was a four-year letter winner as a diver for LSU. Sheirr and her husband, Ken, live in The Woodlands with their twins, Jordan and Zachary.

Ticketing is the next frontier of major growth in the sports business.