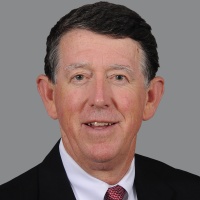 As an Athens, Georgia native and 1976 University of Georgia graduate, Greg was named Director of Athletics at UGA on August 13, 2010, after serving 18 years in the athletic department at the University of Florida. He emphasizes exploring new ideas and initiatives designed to move the organization forward in all areas of competition, academics, service, and exceptional experiences for student-athletes and supporters. Greg oversees a 21-sport athletics program supported by a budget of $123 million and has been a standard bearer for academic achievement. In addition, he has been at the forefront of facility expansion and renovation. The recent completion of the Indoor Athletic Facility provides a facility for use by multiple sports. Under Greg's leadership, FY16 fundraising reached a record of $57 million in cash and pledges to support UGA Athletics. He currently serves on the SEC Fan Experience Working Group and the U. S. Tennis Association Athletic Director's Advisory Group.