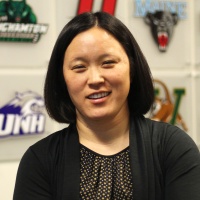 Amy is in her sixth year leading the America East Conference. Recently, the league signed an 11-year extension with ESPN that includes a co-branded digital network, The AE on ESPN3. The America East unveiled a major rebranding initiative in 2013 centered on Building the Complete Student-Athlete. Amy has aligned many initiatives with this platform such as an Academic Consortium, #3Pillars Academy, Alumni Network and Health & Safety Summit. America East is also a diversity and inclusion leader by being the first conference to partner with the You Can Play Project and LGBT SportSafe. In 2016, she was recognized by the Sports Business Journal as a Forty Under 40 honoree. Amy has previously worked at the NCAA, ACC, Missouri Valley and Big East. She earned her bachelor's degree from the University of Wisconsin-La Crosse where she played softball. She is currently in the Executive MBA program at the MIT Sloan School of Management.