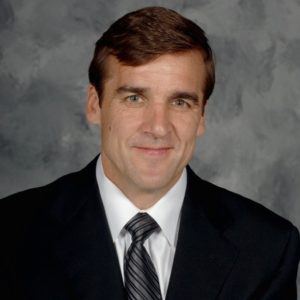 George was named GM of the Vegas Golden Knights on July 13, 2016. In this role, George oversees all hockey operations matters related to the franchise and serves as the club's Alternate Governor. George is entering his 18th year as an NHL GM, having held a similar post with the Washington Capitals from 1997-2014. His Capitals teams won seven division titles, an Eastern Conference championship and the Presidents' Trophy as the NHL's top regular-season team with 121 points in 2009-10. He oversaw the drafting and development of players such as Alexander Ovechkin, Nicklas Backstrom and Braden Holtby, and hired Bruce Boudreau and Adam Oates into their first NHL head coaching jobs. Off the ice, the Capitals went from only 2,900 season ticket holders in 1997, to one that sold out every game the final eight seasons McPhee was with the team. George received his JD from Rutgers University and his Bachelor of Arts degree in Business from Bowling Green State University.