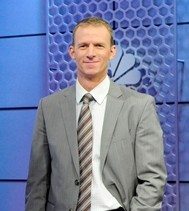 Analyst, Premier League Robbie Mustoe serves as a studio analyst of NBC Sports Group's Premier League coverage including Premier League Live , NBC Sports Group's pre- and post-match show. Mustoe provides insights and analysis from NBC Sports Group's state-of-the-art International Broadcast Center in Stamford, Conn. A former Premier League midfielder, Mustoe's broadcasting experience includes working as a soccer analyst for ESPN, working on all the major European leagues, and in 2012, the European Championships in Poland and Ukraine. In 2010, Mustoe served as a match analyst for ESPN's presentation of the 2010 FIFA World Cup South Africa. His television career also includes ESPN2's coverage of the Premier League and ESPN International's coverage of the UEFA Champions League matches. Mustoe began his soccer career as a junior with Oxford United in 1987. He made his Football League debut in the 1986-87 season, and played nearly 100 league matches for the club. He joined Middlesbrough FC in 1990, and became a consistent player for the team for 12 years. Mustoe had played in over 450 matches - including three Wembley Cup Finals - for Middlesbrough and was granted a Testimonial Match for outstanding service. He played a season at Charlton Athletic before ending his professional career in League One with Sheffield Wednesday. After retiring as a player, Mustoe moved to the United States where he began to coach college soccer, first at Bentley College, then at Boston College, where he helped the team to their first ACC Men's Soccer Conference and Tournament victories in 2007.