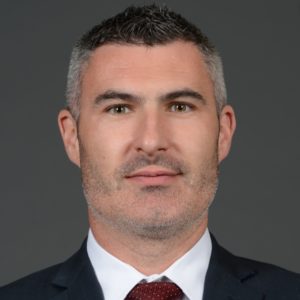 As Sporting Director, Pdraig, in his third season with the Rapids, oversees all soccer activities including oversight of the coaching and technical staff, player acquisitions and scouting, the youth development academy program, soccer operations budget and the MLS salary cap. Prior to joining the Rapids in January 2015, Pdraig spent the previous three years with European soccer's governing body, UEFA, and worked for the Football Association of Ireland (FAI) beforehand. Pdraig has been a key player in UEFA's Financial Analysis Group, which assesses the top professional European clubs in the areas of finance, corporate and sporting structures. He also oversaw national association and club compliance with Financial Fair Play and Licensing regulations. While at the FAI, Pdraig introduced the first mandatory salary cap in European league soccer and chaired the strategy group charged with implementing a fully integrated football development and competition pyramid in Ireland.