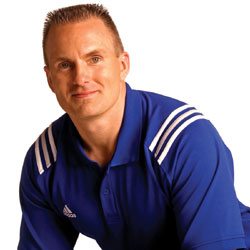 CEO, Athlete's Performance An internationally-recognized leader and innovator in the world of athletic and human performance, Mark Verstegen is Founder and Chairman of Athletes' Performance, which has set the standard for providing athletes with cutting-edge training based on the latest sports science. Mark and Athletes' Performance support nearly 1000 professional athletes globally and in their World Class facilities (CA, AZ, TX, FL), where Mark and his team have implemented many of his unique and breakthrough concepts in athletic performance. Mark began his coaching career at his alma mater, Washington State University, before completing his Masters degree in Sport Sciences at the University of Idaho. He became Assistant Director of Player Development at Georgia Tech where he implemented innovative and successful performance programs for football, men's basketball and golf. In 1995, Mark ventured to Bradenton, Florida to create the International Performance Institute, which became recognized worldwide under Mark's direction. Mark's continual pursuit of quality and his vision of creating a facility completely dedicated to helping athletes achieve their goals led to the development of Athletes' Performance in Tempe, Arizona in 1999. Athletes' Performance opened APLA in 2003 at the Home Depot National Training Center in Los Angeles, California and has since added APFL in Gulf Breeze, Florida with the Dr. James Andrews Institute, and most recently APTX in Frisco, Texas. In 2004, Mark authored his first book, titled Core Performance, which reached the top 25 on Amazon within 6 weeks of its release and has sold well over 100,000 copies. Mark has subsequently launched four additional books: CP Essentials (2006), CP Endurance (2007), CP Golf (2008), and CP Women (2010). Mark's widely acclaimed Core Performance system is also available online through interactive, progressive programs and other world-class performance lifestyle content at www. CorePerformance. com . Mark and his team launched the acclaimed Core Performance Center in Santa Monica, California in 2009, and additional sites and services within leading corporations such as Intel and C&S. ( www. CorePerformanceCenters. com )Mark and Athletes' Performance consult for high performance companies including adidas, Intel, EAS, Gatorade, Keiser, Power Plate, Sheraton, GoFit, and TIGNUM, helping them from innovation, testing, consumer marketing, and sustainable performance. Mark serves as the Director of Performance for the NFL Players' Association, where he focuses on player safety and welfare. He is a regular contributor to and many leading health and fitness publications, as well as a sought after industry speaker who regularly presents at the leading conferences in the field.