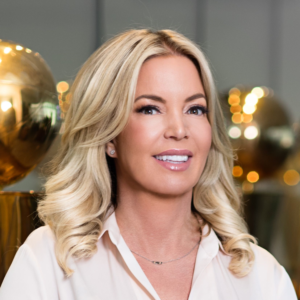 As CEO and Controlling Owner, Jeanie Buss is responsible for running all aspects of the Los Angeles Lakers organization. Buss, who oversees the business and basketball operations of the team, works closely with President of Business Operations and COO, Tim Harris as well as President of Basketball Operations, Earvin “Magic” Johnson and General Manager Rob Pelinka.

In addition to her role as CEO, Buss also serves as the Lakers’ governor, representing the team on the NBA’s Board of Governors. She is currently a member of the NBA Advisory and Finance Committee and serves on the NBA Labor Committee, which in 2016 successfully reached a deal with the NBA Players Association for a new collective bargaining agreement.

Named by the Sports Business Journal in October of 2011 as one of the Game Changers: Women in Sports Business, Buss serves as a Trustee of the University of Southern California, her alma mater. She is also a co-host of Lakers All-Access, a yearly event presented by the LA Sports and Entertainment Commission, a nonprofit organization which draws events and attractions to Los Angeles.

The Celtics-Lakers rivalry is one of the most storied in all of sports.