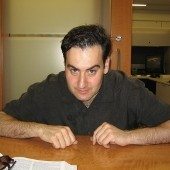 Writer and Editor, Sports Illustrated Richard Deitsch is a writer and editor at Sports Illustrated and SI. com, where his specialties include media, women's athletics and the Olympics. He has worked for nearly every division of Sports Illustrated since he was hired in 1997, including the Swimsuit Issue, SI For Women and the commemorative unit. Deitsch has covered seven Olympic Games as well as multiple NCAA championships, US Opens and Super Bowls during his professional career. He spent the 2008-09 academic year studying as a Knight-Wallace Fellow at the University of Michigan, where he examined the intersection of 20-somethings and the sports blogosphere. Deitsch has a B. A. in Communications and Political Science from the University at Buffalo and an M. S. in Journalism from Columbia's Graduate School of Journalism, where he currently works as an adjunct professor. He frequently appears as a guest on radio and television, including appearances on the CBS Evening News, CNN, MSNBC, Fox News Channel, ABC's Good Morning America and sports-talk radio stations around the country. In 2013, Time Magazine named Deitsch's user-generated "Single Best Moment" project as one of "The 140 Moments That Made Twitter. " In 2012, Mashable. com named him as one of 10 Must-Follow Twitter accounts for sports fans. Deitsch is married, lives in Manhattan, and always wishes the best for Buffalo's snakebitten sports teams.