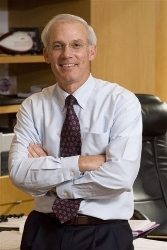 Executive Vice President, Administration, ESPN Edwin M. Durso was named executive vice president, administration for ESPN in February 1996. His wide range of responsibilities include oversight of legal and government affairs, communications, security, corporate outreach and facilities, including the company's 120-plus acre Bristol headquarters. In addition, Durso serves on the ESPN Board of Directors and is secretary of The V Foundation. Durso joined ESPN in September 1989 as senior vice president and general counsel and was promoted to executive vice president and general counsel in December 1990. Durso's legal and business acumen and his direct involvement with many ESPN initiatives over the years distinguish him as a key architect in ESPN's success. He has been directly involved in negotiating major programming acquisitions and has during his career at ESPN also overseen the affiliate sales, consumer marketing, enterprises and human resources areas, giving him a broad understanding of ESPN's overall business. ESPN Enterprises was launched in 1992 under Durso's leadership, and paved the way for many of the company's successful brand extensions, including ESPN. com and ESPN The Magazine . Previously, Durso spent 10 years in the Office of the Commissioner of Major League Baseball where he advanced through several legal and management positions, including General Counsel, Secretary/Treasurer and ultimately executive vice president and chief operating officer. Before joining Major League Baseball, Durso worked in the cable television and litigation practice of Cole, Raywid and Braverman, a Washington, D. C. law firm (July 1978 - Nov. 1979). Durso is a 1975 cum laude graduate of Harvard University where he studied economics and was an accomplished athlete. He was Harvard's starting shortstop for three years, playing in the College World Series twice (1973-74) and earned All-Ivy League recognition. In 1996 he was inducted into the Holy Trinity High School Hall of Fame in Hicksville, N. Y. In 1978, Durso received his law degree with honors from the George Washington University National Law Center in Washington, D. C.