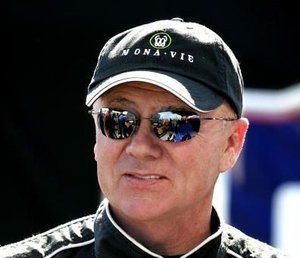 Professional Motorsport Driver @Geoffbodine Geoff Bodine is the oldest of the three Bodine brothers (Brett Bodine and Todd Bodine) who are all NASCAR drivers. His racing career began in the micro-midget division when he was only 5 years old. Geoff was well known as a Modified driver in the northeast racing against popular drivers like Richie Evans, Jimmy Spencer, Ron Bouchard, and others. Geoff had earned Modified championships at Stafford Speedway, Shangri-La, Tioga Speedway, Spencer/Williamson Speedway, and Utica-Rome Speedway. He has won many of the big races in Modifieds including the Lancaster 200 (1978, 1981), Race of Champions (1972 - Trenton, 1978 - Pocono), the Stafford 200 (1978), the Trenton Dogleg 200 (1979), the Thompson 300, the Spring Sizzler (1980 - Stafford Speedway), Oswego Classic (1981), Cardinal Classic (1975 - Martinsville Speedway), Oxford 250 (1980, 1981), as well as many other modified events. Geoff's racing background also included wins in the Late Model division, Bush Grand National division, NASCAR Truck series, and others. He has six Busch Grand National wins to his credit. Geoff is most well know for his NASCAR Winston Cup (now Nextel Cup) career. His first full season in Winston Cup came in 1982 when he earned the Rookie of the Year title. He earned his first Winston Cup pole that year on his 19th start (1982 - Firecracker 400) and scored his first Winston Cup victory two years later on his 69th start at Martinsville in 1984. Geoff's biggest win came at the 1986 Daytona 500. The season opener, Daytona 500, is NASCAR's most prestigious single event. Other career highlights include the 1987 International Race of Champions, the 1992 Busch Clash, the 1994 Winston Select (despite a first segment spinout), and the 1994 Busch Pole award. Throughout his career Geoff has driven for some of the best car owners in NASCAR, including Junior Johnson, Bud Moore and Rick Hendrick as well as owning his own cars. He has 565 starts, 37 poles, 18 wins, and nearly $16 million in winnings during his Winston Cup/Nextel Cup career. He was honored as one of NASCAR's 50 greatest drivers during NASCAR's 50th anniversary celebration. Geoff has always been a great innovator and brought many ideas to Winston Cup. He introduced power steering and full-faced helmets to Winston Cup. He is also credited in the Guinness Book of World Record's with "Most wins in one season" with fifty-five modified race wins.