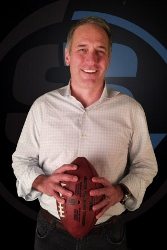 CEO, Sportvision, Inc. Hank Adams is the Chief Executive Officer of Sportvision, Inc. Sportvision is the leading innovator of digital sports content and broadcast enhancements. The Company produces digital content and live TV enhancements on over 3,000 live events all over the world seen by more than 300 million people annually. Events Sportvision enhances include the Olympics, the World Series, the Super Bowl, the NBA Finals, Australian Rules Football, Korean baseball, Japanese League Football, and more. Sportvision partners with leagues and media companies to create original and cutting-edge products across broadcast, wireless, online and gaming platforms. Sportvision has forever altered the sports landscape with its iconic broadcast products such as the "Yellow Line" for football, K-Zone and PITCHf/x for baseball, RACEf/x for NASCAR, and the "Glowing Puck" for the NHL. Similarly, the Company has created Emmy Award-winning and popular digital sports content such as PitCommand and RaceView products on NASCAR. com and is a major contributor to MLB's @Bat iPhone application and online Gameday applications. Sportvision has been widely recognized for its innovations. It was credited by the Sports Business Journal with developing one-half of the top 20 sports TV broadcast innovations since the first live TV sports broadcasts in 1939. The Yellow 1st & Ten was rated as the 7th greatest innovation on ESPN's Top 100 Innovations in sports and the Company was recently named one of the World's 50 Most Innovative Companies by Fast Company Magazine (ranked #34, Fast Company, March 2010). Sportvision has won ten national Emmy Awards, two Horizon Awards and a Bandie for the best interactive TV product. The Company was a winner of the Ernst and Young Illinois High Tech Award in 2003, as well as being named a Deloitte and Touche Fast Fifty winner (50 fastest growing companies) multiple times. In addition to building three successful companies, Hank was awarded Sports Business Journal's Top Forty under Forty sports executives and Crain's Chicago Business, Forty Under Forty. Prior to running Sportvision, Adams was a co-founder and CEO of Real Fans Sports Network. Adams built Real Fans into a Top 5 Site on AOL in 1995 as the first social media sports site. In 1997, America Online bought Real Fans. Adams then spun Real Fans out from AOL in 1999 to form Ignite Sports Media, which he subsequently merged with Sportvision in 2002 and has been CEO of the combined company since. Adams currently serves on the Board of the Chicagoland Entrepreneurial Council and is an investor in multiple high-tech startups. He is also a member and Officer of the Chicago chapter of the Young Presidents Organization. Previously, Adams worked for Peterson Consulting in Chicago and London as a financial consultant. Adams earned an MBA from the Kellogg Graduate School of Management at Northwestern University. He is a Colorado native that graduated Magna Cum Laude from the University of Colorado with a BA in History and a BS in Finance. He is married with three sons and lives in Evanston, IL.