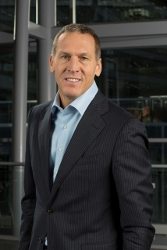 Former President and GM, Toronto Raptors Bryan Colangelo is the former President and General Manager of the the Toronto Raptors (2006-2013) and previously of the Phoenix Suns (1995-2006). During Colangelo's 18 year career as an NBA general manager his teams appeared in the playoffs 11 times, captured four division championships and posted an overall record of 740-688 (. 518). Colangelo was recognized for his successful team building and management on two occasions as he was named the NBA Executive of the Year with the Toronto Raptors in 2006-07 and with the Phoenix Suns in 2004-05, making him one of only three executives to win the award with two different organizations (Bob Bass and Jerry West). He was also one of just three NBA general managers named to the league's newly formed Competition Steering Committee in 2011. Colangelo also served as President of Phoenix Arena Sports, the owning entity of the Phoenix Mercury (WNBA) and the Arizona Rattlers (Arena Football League), from 1991-2002. He was again awarded for his leadership being named the AFL Executive of the Year in 1993 before his team went on to win two league championships in 1994 and 1997. Colangelo, 48, is a 1987 graduate of Cornell University with a Bachelor of Science degree in Business Management and Applied Economics. He was named to the influential "40 under 40" by Street and Smith's Sports Business Journal in 2000.