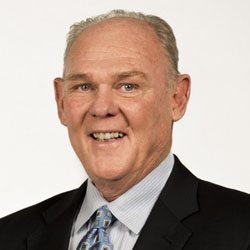 The 2012-13 NBA Coach of the Year, George Karl most recently served as head coach of the Sacramento Kings from 2015 to 2016. Prior to that, Karl coached the Denver Nuggets for nine seasons, leading the franchise to nine postseason appearances including the 2009 Western Conference Finals against the Los Angeles Lakers. While with the Nuggets, Karl became the seventh NBA coach to record 1,000 career wins.

A standout guard at University of North Carolina, Karl helped lead the Tar Heels to the National Invitation Tournament (NIT) title in 1970-71 and the NCAA Final Four in 1972. Karl played all five seasons of his professional career with the San Antonio Spurs – first with the ABA (1973-76) and then with the NBA (1976-78).

A two-time cancer survivor, Karl received the Jimmy V Award for Perseverance at the 2010 ESPYs and actively supports cancer care programs through the George Karl Foundation.