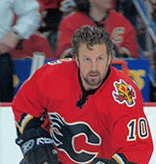 Retired Professional Hockey Player Tony Amonte was drafted 68th overall in the 1988 Entry Draft by the New York Rangers. After making his NHL debut with two games in the 1991 playoffs (two assists), Tony won the Rangers' Lars-Erik Sjberg Award as best rookie at training camp in September 1991. The following month, he won NHL Rookie of the Month honours. In 79 games, Tony scored 35 goals as a rookie and won the Rangers' Fan Club Rookie of the Year award. He was an All-Rookie Team forward and a finalist (third place) for the Calder Trophy. He also helped the Rangers win the Presidents' Trophy. In the playoffs, he helped his team reach the second round with nine points in 13 games. In 1992-93, Tony scored 33 goals and co-led the team with 13 power-play goals. In 1993-94, Tony was traded on March 21 with the rights to Matt Oates to the Chicago Blackhawks for Stphane Matteau and Brian Noonan. After scoring 17 goals in 79 games between two teams, Tony scored four times in six playoff games with the Blackhawks. In the shortened 1994-95 season, Tony scored 15 times in just 48 games. In the playoffs, he helped the Blackhawks reach the Western Conference final. In 1995-96, Tony scored 31 goals and led the team with four short-handed goals (tied) and five game-winning goals. In 1996-97, Tony played in his first All-Star Game and led the Blackhawks with 41 goals and 77 points. He also paced the team with two short-handed goals, four game-winning goals (tied), 266 shots and a +35 plus-minus rating. In six playoff games, he scored four times. After re-signing with the Blackhawks in the summer, Tony went out and paced his team in scoring for the second time in 1997-98. He played in his second All-Star Game and paced the team with 31 goals (tied), 42 assists, three short-handed goals, 296 shots and a +21 plus-minus rating. The Blackhawks missed the playoffs for the first time in thirty years. In 1998-99, Tony played in the mid-season All-Star Game and paced his team in goals (44), points (75), short-handed goals (three) and shots (256) for the third straight season. He averaged 22:12 minutes of ice time per game and led his team with 14 power-play goals and eight game-winning goals. In 1999-2000, Tony played in his fourth All-Star Game and led the Blackhawks with 43 goals, 84 points, 11 power-play goals, five short-handed goals and 260 shots. On September 30, 2000, Tony was named team captain. That season, he led the Blackhawks with 35 goals and finished second on the team with 64 points. He also played in the mid-season All-Star Game on a line with Doug Weight and game MVP Bill Guerin. In 2001-02, Tony played all 82 games and led the team with 35 points. He scored 66 points as the Blackhawks improved 25 points in the standings to make the playoffs for the first time in five years. In five playoff games, he scored one assist. On July 12, 2002, Tony signed as a free agent with the Phoenix Coyotes. After 59 games with the Coyotes in which he scored 36 points, he was traded to the Philadelphia Flyers for Guillaume Lefebvre, a third-round draft pick in 2003 and a second-round draft pick in 2004. In 13 games down the stretch, Tony scored seven goals and eight assists. In the playoffs, he scored seven points in 13 games as the Flyers reached the second round before losing to the Senators. In 2003-04, Tony scored 53 points in 80 games as the Flyers won their third division title in five years. On Dec. 23, Tony scored his 800th career point. On March 5, the same night the Flyers and Senators set an NHL record with 419 penalty minutes, Tony played in his 1,000th career game. In the playoffs, Tony helped the Flyers reach the Eastern Conference final before losing to the Lightning. Tony scored eight points in 18 games