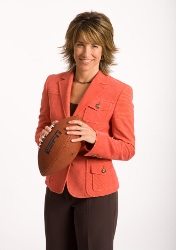 Host and Anchor, ESPN Suzy Kolber is the host of ESPN's year-round NFL Insiders and she anchors coverage from the "Big Early Game," typically the top 1 p. m. ET game on the NFL schedule, for ESPN's Sunday NFL Countdown pregame show. Kolber is widely praised for elevating the NFL sideline role during her 11 seasons covering NFL prime-time games, first on ESPN's Sunday Night Football (2001-05) and then on Monday Night Football (2006-11). In 2006, Kolber worked the sidelines for ABC Sports' broadcast of Super Bowl XL in Detroit and contributed to the network's pre-game show. She also covered one of the participating teams throughout Super Bowl week for ESPN over several years and has played a major role in ESPN's annual NFL Draft coverage since 2004. The first female recipient of the Maxwell Football Club's Sports Broadcaster of the Year Award in 2006, Kolber was also named to Sports Business Daily's 2004 list of the 10 favorite sports TV personalities of the past 10 years. In past NFL offseasons, Kolber served as a SportsCenter anchor and on-site host for ESPN's coverage at the French Open and Wimbledon. She also hosted the X Games, as well as Triple Crown horse racing events and pre-race NASCAR shows on ABC. Kolber has been with ESPN since 1999. She originally joined the company in 1993 as co-host for ESPN2'sSportsNight, when the network debuted October 1 of that year. Credentials: Host of ESPN's NFL Insiders and reporter for ESPN's Sunday NFL Countdown Sideline reporter for ESPN's Sunday Night Football (2001-05) and Monday Night Football(2006-11) for 11 seasons An ESPN anchor/host/reporter since 1999 (and from 1993-96) The first female recipient of the Maxwell Football Club's Sports Broadcaster of the Year Award in 2006. Has also anchored SportsCenter and covered French Open and Wimbledon grand slams, X Games, Triple Crown horse races, and NASCAR.