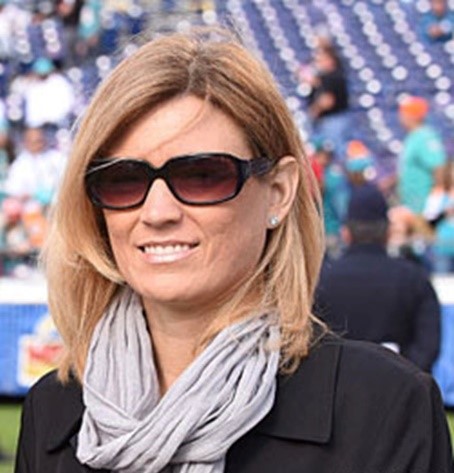 Dawn Aponte is in her fifth season as the NFL’s Chief Football Administrative Officer, responsible for driving football operations objectives and initiatives related to the administrative and operational aspects of the game, as well as football development efforts at all levels of the sport.

‍
Aponte is an attorney and an accountant, who in her 30 years in football has developed expertise in matters relating to contract negotiations, salary cap management, labor and CBA issues, as well as day-to-day management of the football business and administrative operations.
Aponte has previously worked for the Miami Dolphins, Cleveland Browns, New York Jets and the NFL Management Council. She began her career in the NFL as an intern with the New York Jets and worked her way up to an Executive Vice President in football operations with the Miami Dolphins, before returning to the League Office in 2017.

‍
In 2020, she played a critical role in leading the efforts and successful completion of the NFL season in the midst of the global COVID-19 pandemic, serving as the primary liaison between the Football Operations team and key internal and external stakeholders, including Health and Safety personnel, club football staff and league broadcast partners. Aponte also participated in the 2020 NFL Draft announcing picks virtually, and then again in 2021 on the NFL Draft Stage in Cleveland announcing draft selections during Rounds 3 through 7. Aponte is also a member of the NFL Foundation UK Board of Trustees.
Aponte graduated with a Bachelor of Science degree in Accounting from the University of Delaware in 1993 and passed the C.P.A. exam shortly thereafter. She went on to receive her Master’s degree in Finance and Management from Wagner College, then earned her Juris Doctorate from New York Law School and is a member of the New York State Bar. Aponte is married with four children.

Data is the New Muscle: Technology and Sports