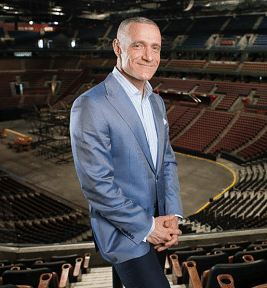 Michael R. Yormark is President & Chief of Branding and Strategy for Roc Nation and is responsible for marketing, branding, strategic partnerships and business development for the full-service company inclusive of artists, athletes, songwriters, music publishing, touring & merchandising, film & television, and a music label. Yormark leads the effort to create and develop optimal opportunities for the Roc Nation brand, and its roster of athletes and artists, through strategic partnerships. He is also responsible for increasing revenue and awareness for all Roc Nation brands and properties, as the company continues to set the standard for global innovation. Michael possesses over 20 years of industry experience, most recently as President & CEO of Sunrise Sports & Entertainment, the Florida Panthers and the BB&T Center in South Florida where he was a SportsBusiness Journal Forty Under 40 winner and brokered the most lucrative naming rights partnership in BB&T Center history. Prior to the Panthers he spent four seasons with Palace Sports & Entertainment and the Tampa Bay Lightning, finishing his Tampa tenure as Executive Vice President. He has also served as Vice President of Integrated Sales and Broadcasting for the Columbus Blue Jackets. He began his professional career in corporate sponsorship sales with the New York Yankees and eventually joined the media rep firm Katz Communications in New York City, where he oversaw sports sponsorship sales for their affiliated television stations. From there, Yormark joined Front Row Communications, the marketing and broadcasting arm of Wayne Huizenga's sports holdings. In four years as Vice President of Sales for Front Row, he helped rebuild Sportschannel Florida and assisted in the opening of the BB&T Center. Yormark and his wife Dana and daughter Sophia reside in Boca Raton, Fla.