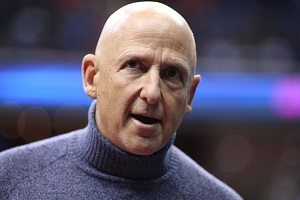 David B. Falk is an American sports agent who primarily works with basketball players in the National Basketball Association. Falk began his career representing professional tennis players for Donald Dell's ProServ and is best known for representing sports icon Michael Jordan for the entirety of Jordan's career. Besides Jordan, Falk has represented more than 100 other NBA players, and is generally considered to be the most influential player agent the NBA has seen. During the peak years of Falk's career in the 1990s, he was often considered the second-most powerful person in the NBA behind Commissioner David Stern, and in 2000 he had at least one client on all but two NBA teams. He was listed among the "100 Most Powerful People in Sports" for 12 straight years from 1990 to 2001 by The Sporting News, and was also named one of the Top 50 Marketers in the United States by Advertising Age in 1995. Falk negotiated the then-highest contracts in NBA history for Patrick Ewing and Danny Ferry. He also negotiated professional sports' first $100 million contract for Alonzo Mourning as part of an unprecedented free agency period, during which his company, FAME, changed the entire salary structure of the NBA, negotiating more than $400 million in contracts for its free agent clients in a six-day period. In January 2007, Falk re-launched FAME, and today serves as its founder and CEO. He represented 9 players in 2012; in the prime of his sports agent career in the 1990s he represented as many as 40 players at a time.