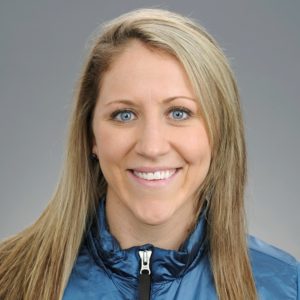 Meghan Duggan has achieved sustained success at all levels of her hockey career in international and collegiate play. A graduate of the University of Wisconsin where she won 3 NCAA Championships, led the nation in scoring was a precursor to her success with Team USA.

During her Team USA career, Ms Duggan has won 3 Olympic medals, including the first Olympic Gold in 20 years at PyeongChang 2018. A member of the U.S. Women’s National Team since 2007, she additionally has won 7 World Championships.

Professionally, she has been a 3-time All-Star in the two different women’s leagues in the U.S. (NWHL) and Canada (CWHL), a 2-time Clarkson Cup champion while playing for the Boston Blades of the CWHL and a two-time Isobel Cup finalist while playing in the NWHL for the Buffalo Beauts & Boston Pride.

Off the ice, Ms Duggan led a successful strike by the 2016-17 U.S. Women’s National Team vs USA Hockey, for the Gender Equitable Treatment of their team in advance of the 2017 World Championship.

The Hockey ecosystem is in the midst of widespread change.