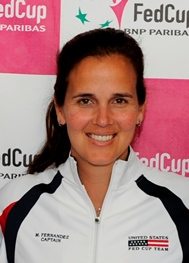 Tennis Champion, ESPN and CBS Analyst & 2-Time Olympic Gold Medalist Former professional tennis player, Mary Joe Fernandez serves as an analyst on tennis events for ESPN, ESPN2 and CBS. Born in the Dominican Republic and raised in Miami, Fernandez enjoyed a successful career on the WTA Tour, with seven career singles titles, 17 in doubles, and being ranked as high as #4 in the world. Fernandez first came to the tennis world's attention as an outstanding junior player, winning four straig Orange Bowl junior titles. In 1985, at age 14 years and 8 days, Fernandez became the youngest player to win a main draw match at the US Open. The following year, Mary Joe turned professional. Before she retired in 2000, she compiled a 437-203 record. In doubles, she was 344-141. She appeared in a Grand Slam final three times - Australian Open (1990 & 1992) and French Open (1993). She also enjoyed success in doubles, winning two Grand Slam events (1996 French Open with Lindsay Davenport and the 1991 Australian Open with Patty Fendick) and 19 WTA doubles titles. In addition, she and Gigi Fernandez (no relation) won the Gold Medal in Doubles at the 1992 and 1996 Olympics. She won the Bronze in singles in 1992 and was a member of the winning United States' 1996 Fed Cup squad. In December 1997, she was named Coach of the U. S. Fed Cup team, and was elevated to Captain in 2009. Fernandez also coached the Women's US Olympic team in 2012. She is married to sports agent Tony Godsick and has 2 kids (Nicholas 9, Isabella 12).