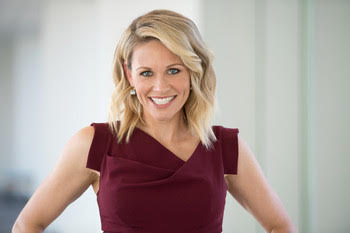 Kerney previously was a sports anchor/show host at ESPN based in Bristol, Connecticut. She anchored SportsCenter five days a week, hosted Fantasy Football Now at 10am ET on Sundays during the NFL season and ESPN’s first-ever internal podcast called “Stay Curious with Lisa Kerney.”

Prior to joining ESPN, Kerney had been at WCBS-TV in New York, serving as sports anchor for CBS 2 News This Morning since January 2012. While at CBS/WLNY, Lisa additionally co-hosted the morning show called "The Couch" from 7-9am covering the Tri-State Area (2012-2013). In 2012, she was nominated for an Emmy alongside her WCBS-TV team.

From October 2010 to December 2011, Kerney was a sports contributor/reporter for MLB Network in Secaucus, NJ.

Previously, Kerney was at KING-TV in Seattle (October 2005-2010) where she served as weekend sports anchor, weekday reporter and Northwest Sports Tonight host. She was also responsible for the national highlight segment of The Jim Mora Show, which aired after every Seattle Seahawks game during the NFL season.

Kerney is a graduate of Lynn University in Boca Raton, FL where she majored in broadcast communications and was point guard and captain of the women's basketball team. She earned Female Scholar Athlete of the Year Honors in 2004 and was most recently awarded Lynn University Alumnus of the Year in 2016.

Kerney is a proud native of Kansas City and currently resides in Greenwich, CT. She and her husband, Patrick Kerney, who played 11 seasons in the NFL for the Seattle Seahawks and Atlanta Falcons have three daughters and a son.