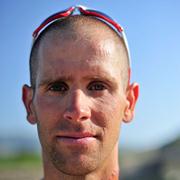 Professional Ironman Triathlete; CTO, Slowtwitch. com After spending four years studying mechanical and aerospace engineering at Princeton University, Jordan Rapp only really came to enjoy it as a result of triathlon. A novice in all three sports, the idea of using equipment to go faster seemed like a great idea to a college rower used to racing for six minutes. 2012 was his 10th season of racing, and 7th as a pro, though he's enjoying a second crack at this whole triathlon thing and at life after being nearly killed in a hit-and-run in March of 2010 while riding his bicycle. He earned his rainbow stripes by winning the ITU Long Distance World Championships in 2011. He's a five-time Ironman winner (US Championships in New York '12, Texas '12, Canada '09 & '11, and Arizona '09). And his first trip to the big dance in Kona in 2012 saw him finishing lucky number 13. As CTO of Slowtwitch. com, Jordan is in charge of wrangling the multi-headed hydra of a website that is Slowtwitch. com. Despite being a somewhat Sisyphean ordeal, he nevertheless does his best to make sure Slowtwitch walks and talks the way it is supposed to. If you like Slowtwitch, feel free to let him know. If you don't, please tell someone else instead. Armed with his trusty Macbook Air, he tries to stay one step ahead of his ever growing "To Do" list. Jordan is married to Canadian Olympian Jill Savege (Athens '04), winner of three ITU World Cups, and the holder of the best Kona debut in the house with a 10th place in 2001. They have one child - Quentin Thomas - born in 2011.