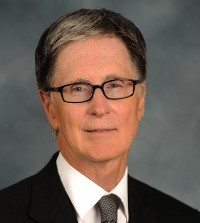 Principal Owner, Fenway Sports Group John W. Henry is Principal Owner of Fenway Sports Group (formerly New England Sports Ventures), which was created in 2001 and has since become one of the largest sports entertainment companies in the world. Fenway Sports Group's portfolio of companies includes some of the most storied names and clubs in worldwide sports, including:the Boston Red Sox, a Major League Baseball club; Liverpool Football Club, an English Premier League football club; Fenway Sports Management, a sales and marketing company; 80% of New England Sports Network (NESN), a regional sports television network; and 50% of Roush Fenway Racing, a NASCAR racing team. The company also owns two of the most renowned venues in sports:Fenway Park, home of the Boston Red Sox; and Anfield Stadium, home of Liverpool Football Club. After purchasing the Boston Red Sox, Mr. Henry and his partners created the Red Sox Foundation, which since 2002 has committed over $68 million to non-profit programs focused on health, education, recreation and social service programs serving at-risk children and their families in New England. In 2010, it was recognized by Major League Baseball with the inaugural "Commissioner's Award for Philanthropic Excellence" for the Red Sox Scholars Program, the Foundation's educational cornerstone. Additionally, Mr. Henry serves as Director of the Florida based John W. Henry Family Foundation, which supports many charitable organizations throughout Boston, New England, and Florida. In October 2013, Mr. Henry purchased the Boston Globe, the Globe's websites and affiliated news businesses, and the Worcester Telegram & Gazette. With the purchase, Mr. Henry became the third owner in the history of the Boston Globe, which is the largest newspaper in New England. In January 2014, Mr. Henry became the 9 th publisher of the Boston Globe. A native of Illinois, Mr. Henry was one of the most successful investment managers in the futures industry. For more than 31 years, Mr. Henry has served as chairman of John W. Henry & Company, Inc. , which he founded in 1981 and is located in Boca Raton, Florida. He has served on the Boards of Directors of the Futures Industry Association, the National Association of Futures Trading Advisors, and the Managed Futures Trade Association. Since the beginning of 1989, Mr. Henry has devoted a substantial amount of time to baseball, which has garnered him multiple championship rings. His love of baseball inspired him in 1989 to becomechairman and majority owner of the Tucson Toros of the Triple-A Pacific Coast League and the West Palm Beach Tropics of the Senior Professional Baseball Association. In 1992 he becamea limited partner of the New York Yankees before becoming the chairman and sole owner of the Florida Marlins from 1999 to 2002. Mr. Henry serves on Major League's Baseball's Executive Council, a number of various MLB committees and is a board member of MLB. com. He currently serves as a trustee of Massachusetts General Hospital and is a board member of the Benson-Henry Institute for Mind Body Medicine at Massachusetts General Hospital. Mr. Henry has received the Master Entrepreneur of the Year Award in New England, a lifetime achievement award from Alternative Investment News, and has been elected to the Futures Hall of Fame by the Futures Industry Association.