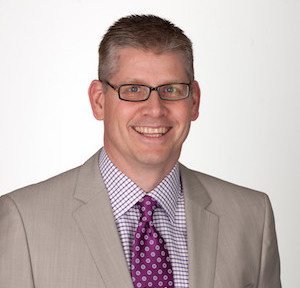 Anchor, SportsCenter John Anderson is an anchor on the Emmy-award winning daily studio show SportsCenter, ESPN's flagship sports news program and co-host of Wipeout on ABC, an extreme obstacle-course series on the network. On November 3, 2013, Anderson made his debut as co-host of ESPN's presentation of the 2013 ING New York City Marathon. He paired with fellow SportsCenter anchor Hannah Storm as hosts of the five-hour race telecast aired nationally on ESPN2 and in New York City on ABC7. Anderson joined ESPN in June 1999 as an ESPNEWS anchor and came to ESPN from KPHO-TV in Phoenix, Ariz. where he was a weekend sports anchor from 1996 to 1999. Prior to KPHO, Anderson was a sports reporter and weekend sports anchor at KOTV in Tulsa, Okla. (1990 to 1996), and a sports photographer and reporter at Tulsa's KTUL-TV from 1988 to 1990. Anderson began his broadcasting career at KOMU-TV in Columbia, Mo. Anderson was graduated from the University of Missouri's School of Journalism with a bachelor's degree in 1987. He was a four-year member of the men's track team, competing in high jump, and captained the squad his senior season. In 2007 he was honored with the Mizzou Faculty-Alumni Award for his contributions to the University, including an ESPN/Missouri internship for one journalism student that he began in 2003. Anderson, a native of Green Bay, Wis. , won the Outstanding Sports Feature Reporting Award, presented by the Oklahoma Chapter of the Society of Professional Journalists, in 1994 and 1995; in 1997, he received the Associated Press Television Award in Arizona for outstanding performance in broadcast journalism. In 2003, he co-wrote a book with golfer Chi Chi Rodriquez, Chi Chi's Golf Games You Gotta Play, which teaches players how to play better golf and have fun while playing. In the fall of 2009, Anderson and his wife started the Anderson Family Charitable Foundation to help supply underprivileged youth with backpacks, schools supplies and food. In November 2010, Anderson competed in the NYC Marathon as Captain of Team Tillman in honor of raising money for the Pat Tillman Foundation.