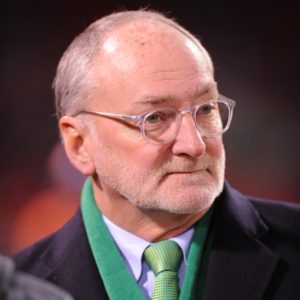 John B. "Jack" Swarbrick Jr. , a University of Notre Dame graduate in his ninth year in 2016-17 as vice president and director of athletics at his alma mater, has attached his signature to a variety of new initiatives during his tenure including the launch of Fighting Irish Media and the development of a plan for expanding Notre Dame Stadium in order to make it a year-round asset for the University, while also improving the game-day experience for student-athletes and fans. Jack is a 1976 magna cum laude graduate of Notre Dame, with a bachelor's degree in economics. Upon graduating from Stanford University Law School in 1980, he returned to Indiana to accept a position as an associate in the Indianapolis law firm Baker & Daniels. He was made partner in 1987 and spent 28 years with the firm. Swarbrick became Notre Dame's 12th athletics director on July 16, 2008. He and his wife, Kimberly, are the parents of four children: Kate, Connor, Cal, and Christopher.