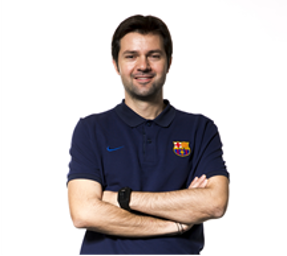 Isaac Guerrero is the Technical Director of the FC Barcelona Football School, a position he has held since 2010. He is also a member of the club’s Knowledge Area, Methodology Department and Innovation Hub. He has been Coordinator of the Barça Coach Development Program for the past four seasons and the director and teacher of the FC Barcelona Professional Football Coach Master for the past two. He obtained a degree in Physical Education and a science degree in Physical Activity and Sport, both from the University of Barcelona. Additionally, he is a Spanish Football Federation Level 3 and UEFA Pro qualified coach.

Guerrero has worked as a Head Coach, Technical Director, and in the Methodology Department for youth teams such as UDA Gramenet, RCD Espanyol and FC Barcelona among others. He is co-author of the book “Working a Proposal for Improving Decision Making in Youth Football” and the upcoming book “The Creation of a Non-verbal Communication Code for Football”.