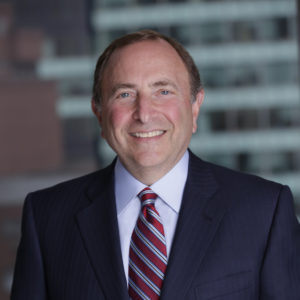 Gary B. Bettman, the first elected Commissioner in National Hockey League history, has directed the League to a series of major advancements since his tenure began on February 1, 1993. At the time Commissioner Bettman assumed office, NHL Clubs competed in 14 U. S. markets. In less than a decade, the League expanded to 30 Clubs, reaching 21 major U. S. markets. Regular-season attendance, which was just over 14 million in 1993, has exceeded 20 million in consecutive seasons since 1999-00. Consequently, total League revenue has grown from $732 million in 1993 to a projected $2. 9 billion (USD) for 2010-11 while League merchandise sales have grown from $275 million in retail dollars to over $1. 3 billion. Following the 2004-05 work stoppage, Commissioner Bettman, in concert with the Hockey Operations department and the Competition Committee, enacted a series of rule changes to emphasize entertainment, skill and competition on the ice, including the elimination of the two-line pass, the introduction of a two-referee system and the establishment of the "shootout," which guarantees a winner in every regular-season game. Commissioner Bettman led the League's Board of Governors in constructing a sustainable economic system under which the League now operates, creating a partnership with the players with a shared objective of increasing hockey-related revenue. In 2010, in a continuing effort to improve player safety, the Commissioner enacted Rule 48 to prevent and punish lateral and blindside hits to the head. The NHL became the first professional sports league to implement a working group for the study of concussions over a decade ago, mandating neuropsychological baseline testing and implementing diagnosis and return-to-play protocols. In the summer of 2005, Commissioner Bettman negotiated a cable broadcast agreement with Comcast/VERSUS that provided rights fees in excess of $200 million over the first three seasons. Concurrently, the Commissioner ushered the NHL to the forefront of the sports world on the Internet. Market research studies define the NHL fan base as young, affluent, computer-literate and international. Commissioner Bettman has catered to the needs of the League's primary demographic, providing original content and exclusive proprietary programming. Commissioner Bettman has expanded League visibility, driven fan engagement and mobilized sponsorship participation to unprecedented levels in North America and abroad. To launch the 2007-08 season, the Commissioner introduced the "Premiere Games" series, setting an international stage for NHL regular season games in prominent European cities. Under the Commissioner's direction, NHL players stocked the rosters of world-class teams in the Olympic Winter Games in 1998, 2002, 2006 and 2010. As testament to growing international exposure, NHL games are now televised in more than 160 countries worldwide. In the U. S. and Canada, Commissioner Bettman brought the game back to its roots, creating the annual spectacle that is the Winter Classic. The regular season outdoor game has turned New Years Day into a celebration of the sport, drawing impressive ratings and enormous crowds at Buffalo's Ralph Wilson Stadium in 2008, Chicago's Wrigley Field in 2009, Boston's Fenway Park in 2010 and Pittsburgh's Heinz Field for 2011. In a partnership with HBO Sports, the Commissioner introduced a groundbreaking series, as part of HBO's 12-time Emmy Award-winning "24/7" reality TV franchise, that explored the inner workings of the Capitals-Penguins rivalry leading up to the 2011 NHL Winter Classic. An outdoor game returned to Canada as well, when Calgary's McMahon Stadium hosted the 2011 Heritage Classic. Charitable undertakings and sustainable initiatives have developed into top priorities of Commissioner Bettman. Since its inception in December, 1998, Hockey Fights Cancer has helped to raise more than $10 million in support of cancer research and awareness. Through Hockey is for Everyone , the Commissioner emphasized building the sport's fan base through grass-roots initiatives that bring hockey to youngsters. As part of NHL Green , the League's 30 Member Clubs launched a post-game food recovery program which has diverted 100 tons of waste from landfill while providing over 120,000 meals to local community shelters. Three of the League's facilities have achieved LEED Building Certification; CONSOL Energy Center (Gold), Bell Centre (Silver) and Phillips Arena (EB). A native of Queens, NY, Commissioner Bettman graduated from Cornell University and the New York University School of Law. He lives in New Jersey with his wife, Shelli, and is father to Lauren, Jordan and Brittany.