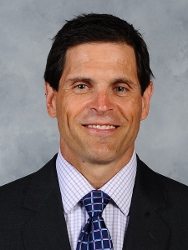 Assistant General Manager, Boston Bruins Don Sweeney is in his eighth season in the Bruins front office and is in his fifth year as Assistant General Manager. He joined Peter Chiarelli's staff in June, 2006 as the team's Director of Player Development and added the position of Director of Hockey Operations to his portfolio in July, 2007 before being named to his current position. He oversees the development of the team's drafted prospects at the AHL, junior hockey, college and European levels in addition to having a supervisory role in the day-to-day operations of the hockey department. Sweeney organized and ran the team's first off-season Development Camp in July, 2007, bringing the club's top prospects to Boston in advance of the main September training camp. Development camp gives the prospects the opportunity to get to know each other on and off the ice while teaching them the level of dedication and training necessary for them to reach the next stage of their careers. The Development Camp is now an annual event, with the seventh such camp held this past summer. Drafted by the Bruins as their eighth pick, 166th overall, in the 1984 NHL Entry Draft, he went on to play four seasons of college hockey at Harvard University. He earned both NCAA East All-American and ECAC First Team All-Star honors with the Crimson and played in the 1986 NCAA Finals before graduating with a degree in Economics. The defenseman played 16 seasons in the National Hockey League, including 15 in a Bruins uniform. He is one of just two defensemen and four players in team history to play over 1,000 games in a Boston sweater and he still ranks third on the team's all-time games played list. He also ranks in the top ten of the club's all-time lists in career goals, assists and points by a defenseman. He played his final NHL season with the Dallas Stars in 2003-04. Sweeney and his wife Christine have twin sons, Jarrod and Tyler.