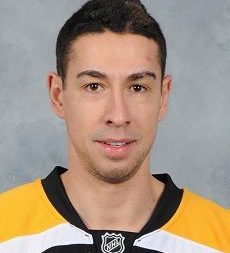 Chris Kelly is a Canadian professional ice hockey forward currently playing for the Boston Bruins of the National Hockey League (NHL). Kelly was drafted 94th overall by the Ottawa Senators in the 1999 NHL Entry Draft and made his NHL debut on February 5, 2004, in a game against the Toronto Maple Leafs. In his rookie season of 2005-06, he became a regular in Ottawa's lineup, appearing in all of the team's 82 games and registering 30 points. Kelly was traded to the Boston Bruins on February 15, 2011 and was a member of the team's 2011 Stanley Cup championship. He continues to serve as an alternate captain for the Bruins.