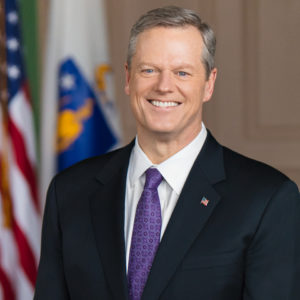 Governor Charlie Baker was inaugurated as the 72nd Governor of Massachusetts in January 2015. Since taking office, he has been making Massachusetts a great place to live, work and raise a family while delivering a customer-service oriented state government that is as hard working as the people of the Commonwealth.

Upon taking office, Governor Baker worked to close two budget gaps worth more than $2 billion without raising taxes, while bolstering local aid for our schools and communities, investing in a more reliable public transportation system and prioritizing funds to fight the opioid and heroin epidemic.

Prior to his election, Governor Baker was a highly successful leader of complex business and government organizations, serving as a cabinet secretary to both Governor William Weld and Paul Cellucci, and leading Harvard Pilgrim Health Care, as CEO, from the brink of bankruptcy to one of the nation’s highest ranked health care providers.

Raised in Needham, Governor Baker and his wife Lauren reside in Swampscott, and are the proud parents of their three children, Charlie, AJ, and Caroline.