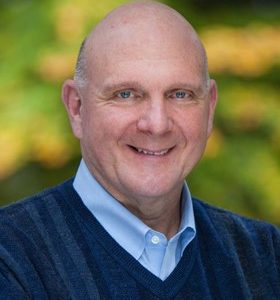 Steve Ballmer is co-founder of Ballmer Group and owner of the Los Angeles Clippers NBA basketball team. Ballmer retired as Chief Executive Officer of Microsoft in 2014 after leading the company for nearly 14 years. He remains a significant investor. Through philanthropy and civic activism, Ballmer Group strengthens promising and proven approaches that increase economic mobility for children and families in the United States. Steve also leads USAFacts, a project seeking to improve transparency in government, including disclosing taxes and borrowings raised, money allocated and spent, and outcomes achieved, much as corporations do through their 10-K reports. He co-teaches a course in the fall at Stanford on understanding government budgets and spending with Professor Mark Duggan, and has taught or lectured on technology, leadership, and innovation at Stanford, Harvard, and the University of Southern California. Steve became Microsoft's CEO in 2000, having served for 20 years in roles as president, senior vice president of sales and support, senior vice president of systems software, and vice president of marketing. He was the company's first business manager. During his tenure at Microsoft, the company pioneered personal computing and democratized enterprise computing, growing from a small start-up to a company that today employs more than 110,000 people. During his tenure Microsoft grew to almost $80 billion in revenue and was the third most profitable company in the United States. He grew up near Detroit, where his father worked as a manager at Ford Motor Company. Ballmer earned a bachelor's degree in mathematics and economics from Harvard University. He worked for two years at Procter & Gamble Company as an assistant product manager and attended Stanford University Graduate School of Business before joining Microsoft. He lives with his wife, Connie, and children in Washington.