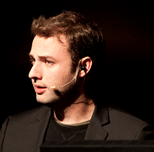 CEO and pro-gamer, eSportscaster @day9tv Sean "Day[9]" Plott is an established personality in the gaming community. Day[9] spent 12 years as a competitive StarCraft player - earning 7 invitations to the World Cyber Games USA Grand Finals. In late 2009, Day[9], a self-professed nerd, professional gamer, caster and stand-up comedian, began to offer his own whimsical mix of strategy, humor and life instruction five days a week on a live internet television show streamed over Twitch. TV. The Day[9]Daily quickly became one of the most viewed and talked about shows on the web with over 11 million views in November 2011 alone. Day[9]TV now has an evergreen library of more than 1000 videos including 400 episodes of the Day[9] Daily. A two hour autobiography show ("My Life of StarCraft") has been seen 2. 5 million times on YouTube.