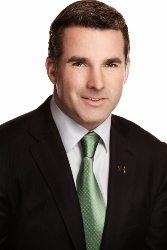 Founder and CEO, Under Armour

Founder and CEO, Under Armour As special teams captain for the University of Maryland football team in the summer of 1995, Kevin Plank had the idea for a T-shirt that wicked sweat and kept athletes cool, dry, and light. He had become frustrated by having to change out his sweat-soaked cotton T-shirt over and over again during two-a-days, and the idea hit him: "There has to be something better. "Upon graduating from Maryland in 1996 with a bachelor's degree in business administration, Plank began the business making that idea a reality and changing the way athletes dress. He went on a mission to find the perfect fabric-performance synthetics-and the perfect fit-compression-and ultimately launched Under Armour (NYSE: UA) in 1996 as the performance alternative to old athletic apparel. It all started in the basement of his grandmother's townhouse in Georgetown. Plank's new business headquarters was literally underground, forcing him to hit the road to spread the Under Armour gospel. With his new shirts in the back of his beat-up Ford Explorer, Plank proceeded to phone every equipment manager in the Atlantic Coast Conference and reached out to his former football teammates, giving them samples and asking them to spread the word about his innovative product. After 18 years of imploring athletes to "Protect this House," Plank oversees a company with over 6,000 employees. Under Armour athletic performance apparel, footwear, and equipment are sold worldwide and worn by athletes at all levels - from youth to professional - on playing fields around the globe. Plank has received a wide variety of professional accolades that demonstrate his growing influence within the industry.