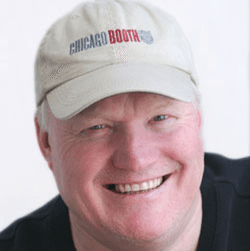 George J. Stigler Distinguished Service Professor of Economics, University of Chicago Booth School of Business Kevin M. Murphy is the first professor at a business school to be chosen as a MacArthur Fellow. He was selected for "revealing economic forces shaping vital social phenomena such as wage inequality, unemployment, addiction, medical research, and economic growth. " The foundation felt his work "challenges preconceived notions and attacks seemingly intractable economic questions, placing them on a sound empirical and theoretical footing. " In addition to his position at the University of Chicago, Murphy works as a faculty research associate for the National Bureau of Economic Research. He primarily studies the empirical analysis of inequality, unemployment, and relative wages as well as the economics of growth and development and the economic value of improvements in health and longevity. In 2007, Murphy and fellow Chicago Booth faculty member Robert Topel won the Kenneth J. Arrow Award for the best research paper in health economics for "The Value of Health and Longevity," published in the Journal of Political Economy. The award is given annually by the International Health Economics Association. A fellow of the Econometric Society and an elected member of the American Academy of Arts & Sciences, Murphy was a John Bates Clark Medalist in 1997. He has received fellowships from the Earhart Foundation, the Sloan Foundation, and the Friedman Fund. Murphy is also the author of two books and many academic articles. His writing also has been published in numerous mainstream publications including the Boston Globe, the New York Times, the Chicago Tribune, and two Wall Street Journal articles coauthored by Nobel laureate Gary Becker. He earned his PhD in 1986 from the University of Chicago after graduating from the University of California at Los Angeles with a bachelor's degree in economics in 1981. He joined the Chicago Booth faculty in 1984.