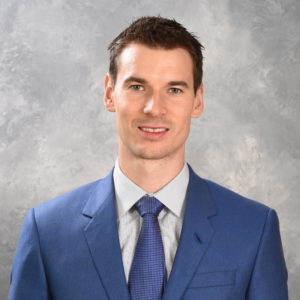 John Chayka is in his second season with the Coyotes as General Manager and was promoted to President of Hockey Operations on July 12, 2017. He was named general manager on May 5, 2016. At 26-years old, he became the youngest general manager in NHL and North American major sports history. Chayka joined the Coyotes prior to the 2015-16 season as Assistant General Manager, Analytics, and was involved in all areas of hockey operations. Prior to joining the Coyotes, he co-founded and served as Director of Hockey Operations at Stathletes Inc. , a hockey analytics firm that tracks data through an intensive video analysis process. The now 28-year-old native of Jordan Station, Chayka was drafted to the Ontario Hockey League but committed to going to college instead, earning a bachelor's degree in business administration from the Richard Ivey School of Business at the University of Western Ontario. John currently resides in Scottsdale with his wife Kathryn.