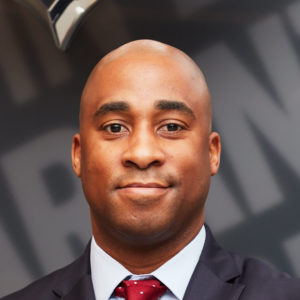 Damani Leech began working at the League office during the 2015 season. In his role as senior vice president of football strategy and business development he develops strategies and innovations that position the game of football for future growth and enhancement. Additionally, he connects Football Operations to other League operating units, working collaboratively to drive business growth for the League.

Prior to the NFL Damani Leech worked at the NCAA national office for over 17 years. He left the NCAA as Managing Director for Championships and Alliances, where he provided strategic oversight and direction for multiple NCAA championships – including Division I football, women’s volleyball, men’s ice hockey and baseball – in addition to managing the Association’s playing rules & officiating department.

Damani began his career at the NCAA in 1998, shortly after graduating from Princeton University where he was a football student-athlete, earning Third-team All-America honors and earning First-team All-Ivy League as a defensive back three consecutive years. A native of Tacoma, Washington, he received his bachelor’s degree in Public Policy and International Affairs from Princeton University and earned a master’s degree in Higher Education Administration from Indiana University.

The ecosystem of a sports league is unique, and league offices are given the difficult task of bringing together a set of disparate teams and pointing them towards the best interests of the collective whole.